The History of Falconry in Pest Control 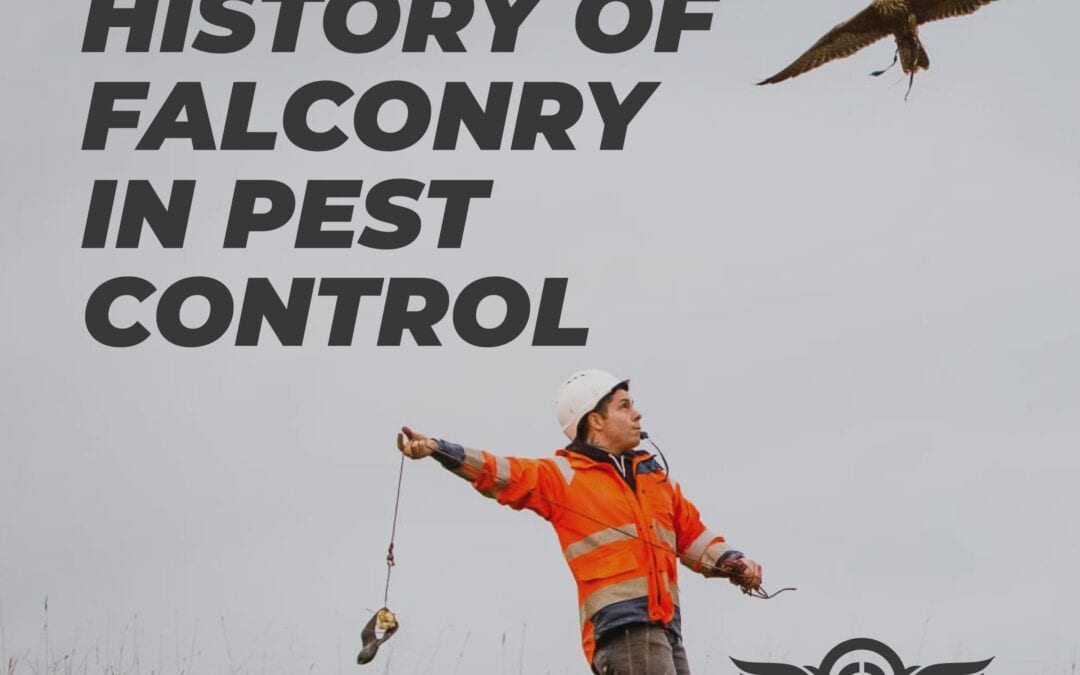 From hunting to sport, and now bird control, the history of falconry is rich and it dates back to ancient cultures. In ancient Rome and Western Asia in around 2,000BC, falcons were used for hunting at a time when advanced weaponry like guns didn’t exist. In ancient Mesopotamia (the area that we now know as Iran, Iraq, and Syria), falcons were used to protect livestock and crops from pest birds.

Falconry was introduced to Europe in around 400AD and the birds of prey were used for both sport and as a status symbol among the nobility. Apparently, Henry VIII himself was an avid falconer.

Today, falconry is a popular and very lucrative pastime for enthusiasts. In the United Arab Emirates, falconry races are quite prestigious and winners can make a tidy profit.

But apart from hunting and sport, falconry has other uses, namely controlling pest birds.

Why are falcons effective for pest control?

Falconry helps control pest birds by using their natural instincts against them. Flying a falcon, a natural predator, over an area will frighten and deter pest birds like pigeons and gulls.

It can be a better option than using deterrents like bird scarers because birds are pretty intelligent animals and they’ll soon work out what’s a real threat and what’s not. Falconry might also be preferable to bird proofing methods like spikes and netting if you need to control birds in a very large or difficult-to-access area. Neither of these is a problem for a falcon that will be able to cover large distances to deter pest birds. Falconry can also be an effective longer-term bird control measure. If the threat of being attacked by a bird of prey has made an area undesirable for pest birds to perch on or nest in, they won’t come back.

Falconry is also the humane choice for pest control. There are no chemicals or traps involved, and the birds of prey are trained not to kill or harm the pest birds.

Which birds are used in falconry for pest control?

Any predatory birds can be used, including falcons and hawks. The Harris Hawk is a popular choice for falconry pest control as they are easy to train and they demonstrate naturally aggressive and territorial behaviour that will scare pest birds.

Can anyone just use falconry for pest control?

No, you can’t randomly borrow a falcon from the guy you know down the road. Falconry pest control is strictly regulated in the UK. Anyone who wants to fly a falcon for this purpose needs to comply with the terms of the Wildlife and Countryside Act 1981 which states that the birds of prey should be bred in captivity and that you need a license for falconry. You also need permission to fly a falcon if you’re flying it over someone else’s land.

We are one of the UK’s leading specialists in falconry bird control. We’ve flown our birds over International stadiums, hospitals, landfill sites, docks, schools, warehouses, and supermarkets and successfully deterred pest birds for good.

If your site is plagued by feral pigeons or gulls, consider falconry bird control to prevent and control pest birds.

As well as falconry, we provide a range of other bird proofing and bird control solutions from bird spikes and netting to wire, gel, and visual and acoustic deterrents.

We use cookies to ensure that we give you the best experience on our website. If you continue to use this site we will assume that you are happy with it.AcceptPrivacy Policy